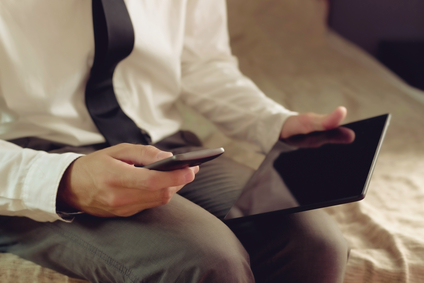 Yesterday was Valentine’s Day, and my husband went to dinner with not just one, but TWO women. Then they all went back to their hotel for the night.

Okay…that’s a joke. I mean it’s technically true, but Brad was away at a seminar, and when he went down to the hotel lobby to go find some dinner, he happened to run into some other attendees who invited him to go with them. (Dinner with ONE lady I might not have liked very much, but two, I didn’t mind!) He hates traveling for business and hates eating alone, so I was glad he had people to talk to for a couple of hours.

He called me afterward and told me all about it; how they had discussed families and children and jobs. I’m sure he must have mentioned that we’ve been married over twenty years now. It’s something we’re both so proud of, yet we try to never take it for granted…never feel too sure that we’ve made it and we’re in the clear. We occasionally hear of long marriages splitting apart and we wonder if they were miserable all along, or if they were like us…proud of themselves and thinking they had it made until some terrible thing came along and ruined it.

We want to avoid terrible things.

This is what was on Brad’s mind last night when he told me that he’d been thinking…and he bet there were people that very night in his very hotel, doing things they ought not to do, and how he had come to see that as one of the lowest and most despicable forms of human behavior he could imagine. To selfishly do such harm to the person you’d made a life with, and for what? For something so relatively meaningless. Excitement. Physical pleasure.

Oh, but the kicker is, we’re not saints. Neither of us. I’m not saying we’ve gone all over town having affairs, but I will tell you that we understand the urges that drive that kind of behavior, and how in a split second, they can hijack your common sense. “I didn’t know how dead I felt until this person made me feel alive again.” “I wasn’t looking for anything like this, it just happened.”   Yeah, yeah. Blah, blah blah. Until the new wears off, and you glance behind you and see the wreckage of your life.

We’re so thankful to have stuck together, somehow, through the years when our hormones were calling too many of the shots. We wish we could tell younger couples to just hang on to each other through those years that pass more quickly than you’d think. Do that, and one of these days you will be holding the hand of someone that you literally spent your life with. Even taking nothing for granted, that’s a proud feeling.